A homeowner began having issues with mold growth in their home. It was discovered that the humidity was caused by their crawl space. We needed to install a vapor barrier, sump pump, and dehumidifiers but the crawl space was only 6' to 12' inches tall.

Before we could get started with the installation, our team had to dig a tunnel/trench for the dehumidifier ducting. We then installed a SmartSump pump system with liner, cast iron pump, CleanPump Stand, airtight lid with airtight floor drain, and WaterWatch alarm system.  Debris were removed and a SaniDry CX Air System was installed to keep humidity low. They equipped the crawl space with an encapsulation system using CleanSpace Drainage Matting under a CleanSpace liner. The area was regraded to direct water seepage to a sump system. A small pump was installed to move the water from the dehumidifier to and out of the crawl space. Two wireless sensors were placed to send temperature and humidity readings to a small panel inside the house. Finally, an EverLast Door was constructed to allow access to the crawl space and keep water and air out. It was a lot of hard work but the owner was able to rest easy knowing he had a system in place to keep his house mold free. 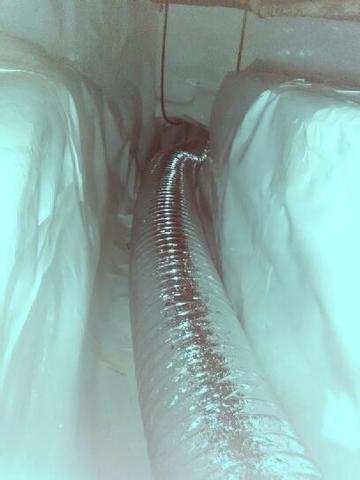 Trench with duct work and a CleanSpace vapor barrier.

Before & After Photos: Encapsulating A 1 Foot Crawl Space
Back to Previous Page
Back to Case Studies